Sea Glass Colors From Common to Most Rarest

You are here ... Home | What is Sea Glass | Sea Glass Colors 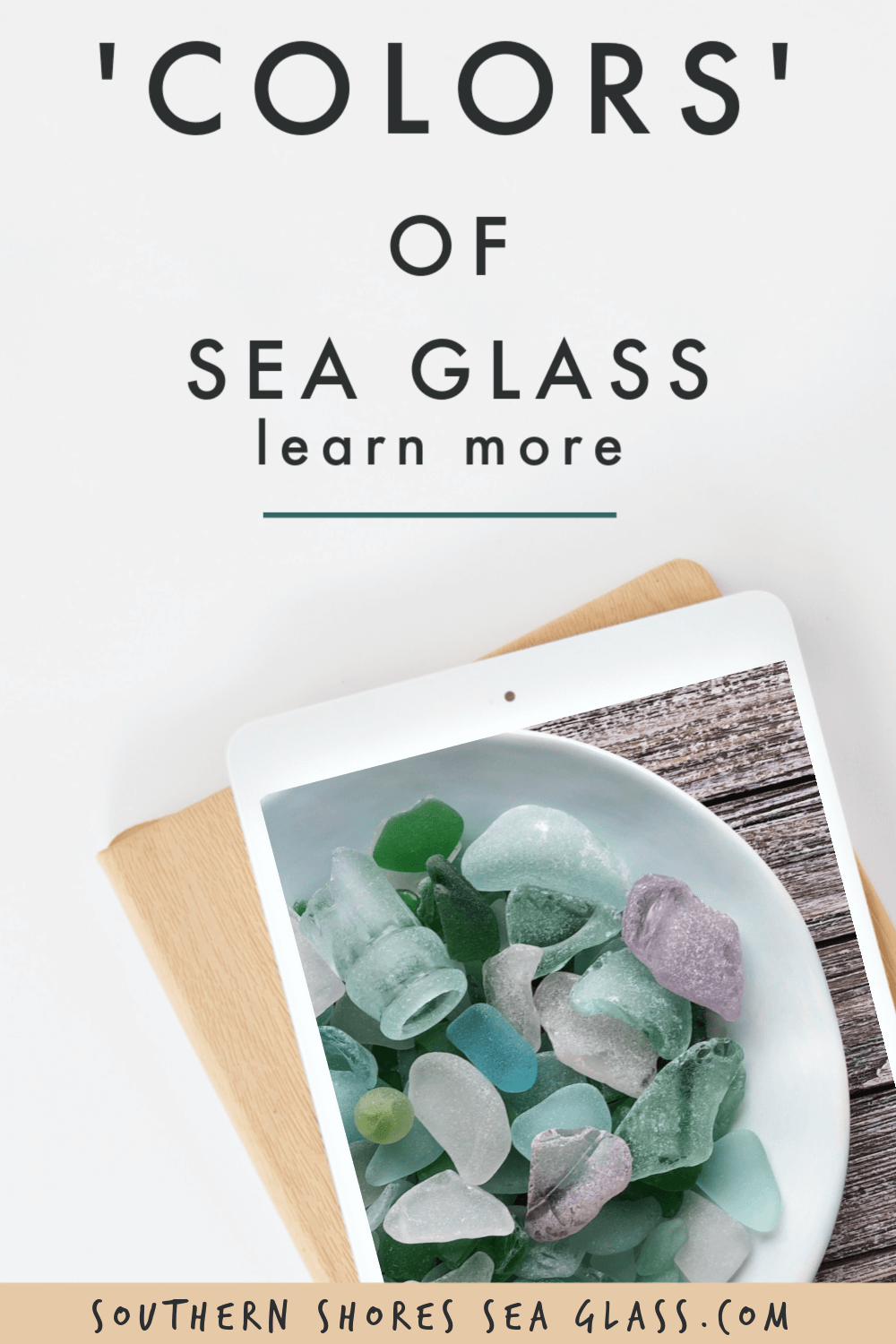 How cool does it feel to wander along the shoreline and spot a bit of color?

The type of sea glass, the sea glass color and its origin, depends on the where you are hunting for the treasure, the site itself, and the history of the area.

It can also depend on the amount of human contact and possibly the action of the tidal flow along the shoreline.

Most glass that is used or was used is soda-lime glass, which is a mixture of sodium oxide, calcium oxide and silicon dioxide. Other glass types are borosilicate glass and lead glass (used in old TV cathode ray tubes) 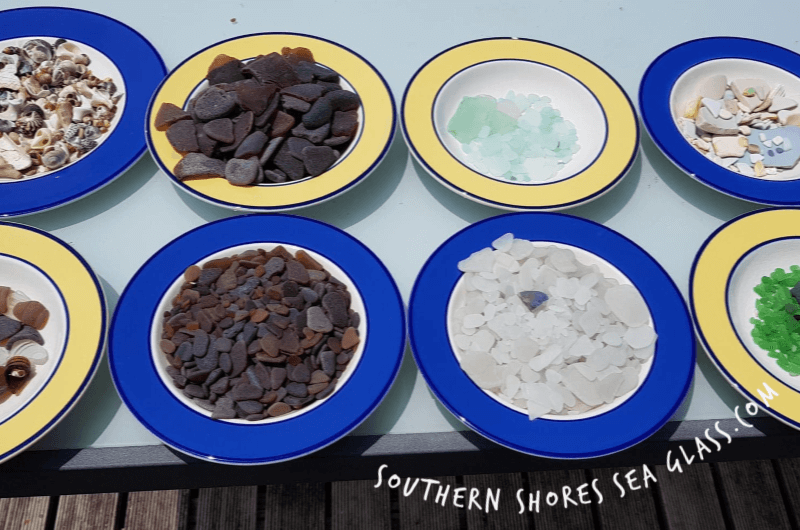 Reasons for the use of 'Color' in glass

The use of color in glass, apart from its aesthetic qualities, can also be for a practical reason/s. For example, beer bottles are colored brown or green to help stop the deterioration of the brew as it cuts out specific wavelengths of UV light.

In years gone by medicines and beverages had to be transported great distances and needed to be stored for long periods of time. The darker and thicker the glass was, the better protection it had for the contents.

Iron slag was used sometimes to strengthen the glass and make it more shatterproof.

A fair amount of sea glass collected on our beaches today is fairly modern glass, from the 1900's onward, that comes from glass products such as bottles, food containers, glasses and dinnerware.

- white or frosted seaglass color. The frosting, or antiquing of the piece, comes from the natural weathering on the glass surface by the salt water and sand particles. Origins mainly from wine bottles, jars, glasses, home decor pieces, old milk bottles and medicine bottles 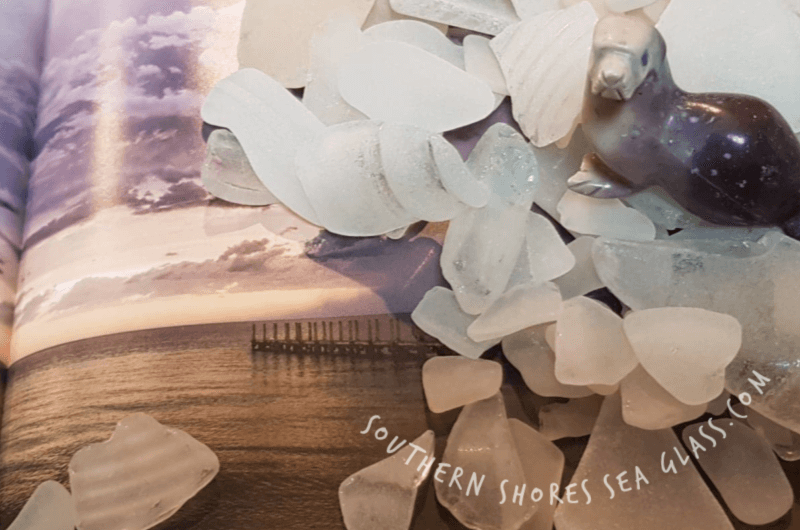 - brown glass - mainly from beer and whiskey bottles. Some medicinal bottles such as Lysol products, used brown colorant to preserve the contents. 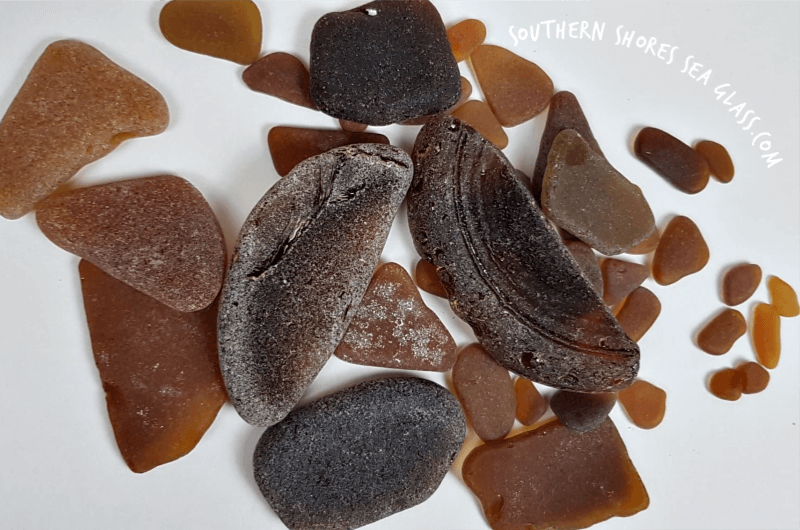 Kelly green is an American term. The name derives from the fact that the surname Kelly, as well as the color green, are both popular in Ireland.

- seafoam green - common color used in the bottle manufacturing industry on the late 1800'sand early 1900's. Seafoam is a light blue-green with a bit of grey mixed in. 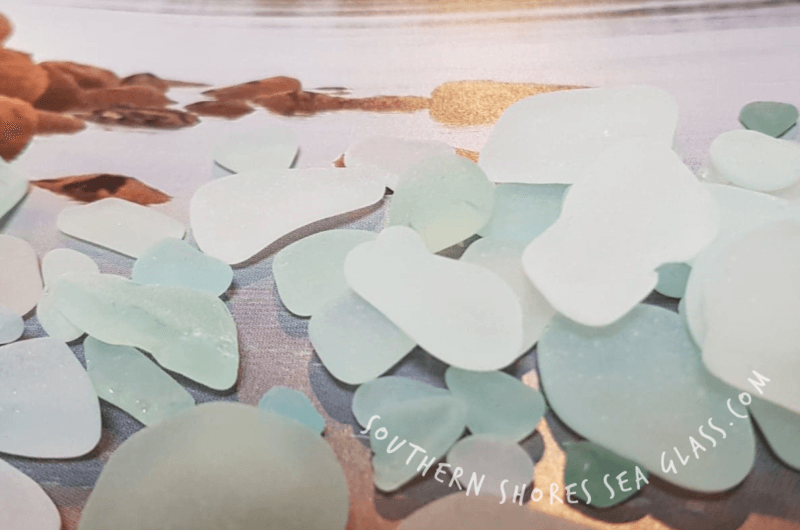 Origins usually from vintage soda bottles. The Coca Cola company is associated quite a bit as this is the color it used to produce its product right up until the early 20th century.

Iron that is added in production creates a green or soft aqua color. The deeper the shade of color, the more iron addition was used.

It was discovered that the addition of copper in the proper quantities would give glass a light to vibrant aqua hue. This then was adopted in the production of aqua se glass. Most aqua sea glass is over 100 years old. Production was during the 1800's and through to the mid 1900's.

Really old aqua sea glass most likely has a lot of bubbles in it, created during production. 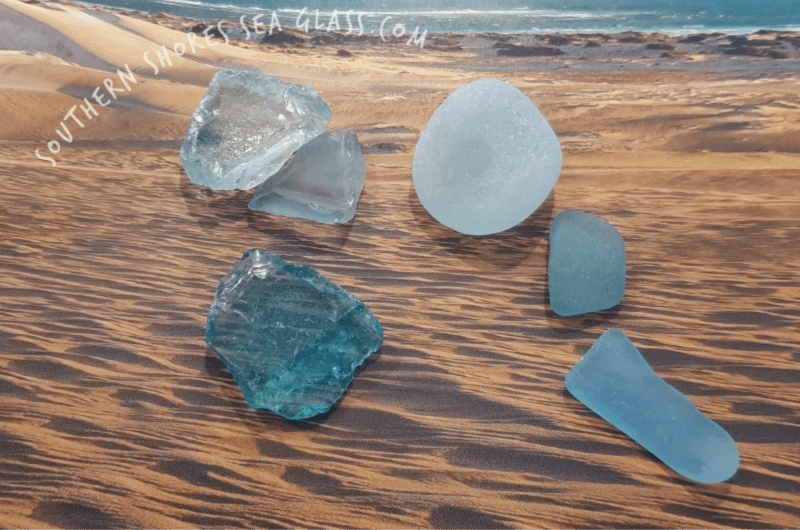 - Cornflower Blue sea glass color - origins around the 1900's, used in the bottling of Milk of Magnesia. Widely used in the Depression era for tableware and in medicine bottles. The metal used to color the glass being copper, used in small to medium concentrations.

- cobalt blue - ancient cobalt blue glass relics date back to the early Egyptian and Roman times and any artifact is attributed to the source as being prestigious or wealthy. Pieces of cobalt blue sea glass found these days most likely originates from decorative household items such as glassware and lamps, a sign that the owners were wealthy. Industrial production used the distinctive color in manufacture of poison medicine bottles and ink wells/bottles. Vicks used it to store their well known Vicks Vapour Rub product.

Cobalt oxide is used in its production. 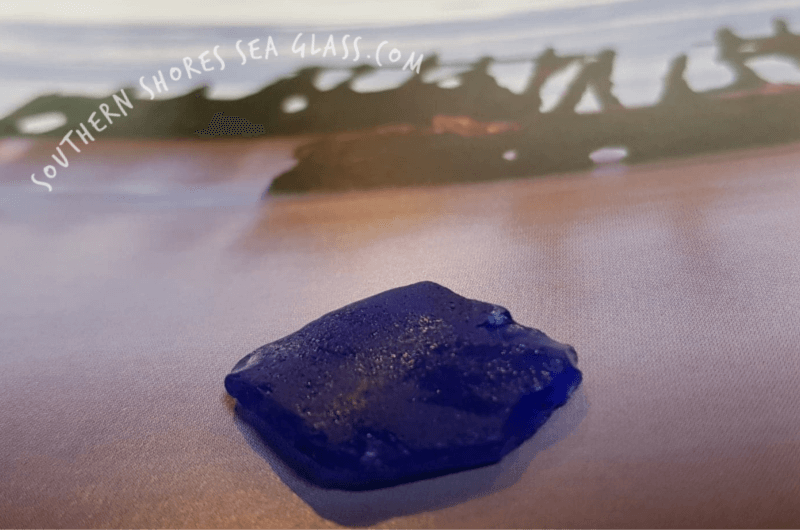 Produced in the mid 1900's it came in a range of colors. It was mass produced and affordable in those days to the public. It was often used as gifts to the public.

Selenium was used as the additive to the glass when producing the item.

Cranberry glass or 'Gold Ruby' glass is a red glass made by adding gold salts or colloidal gold to molten glass. Quite an expensive process and thus only decorative pieces were produced. Produced in small quantities.

Modern day origin for this glassware was the 19th century during the Victorian era. 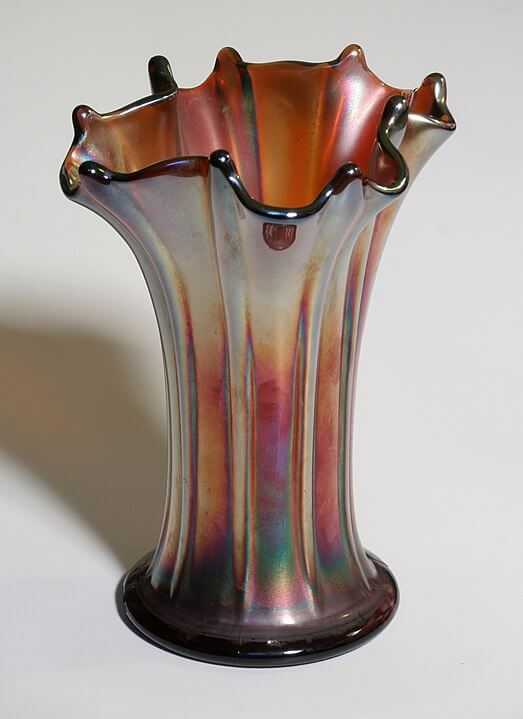 Carnival glass is an example of this and was mass produced in the Depression years. Metallic salts are added whilst the glass is hot.

Firing it once more produces the well known iridescent shine that is well known for.

Era 1920's although some was still being made in the beginning of the 20th Century.

- purple or lilac colored sea glass - In past production of purple glass, manganese was added to glass as a clarifying agent, decolorizer: something added to the batch of glass to counteract the impurities — in this case, manganese. Manganese turns purple when exposed to UV rays.

Most purple sea glass is actually “sun” purpled, with the sun creating this purplish tinge. Glass containing enough manganese and exposed to several years sunshine may slowly turn some shade of very light to medium purple.

Origin dates to late 1800's to early 1900's when it is supposed that World War 1 and the access to manganese had an impact on production as most of the manganese came from Germany. Products produced were home decor products, bowls, tiles, glassware, light bulb insulators.

Note when buying genuine sea glass that a piece may have been artificially 'purpled' ask for authenticity. 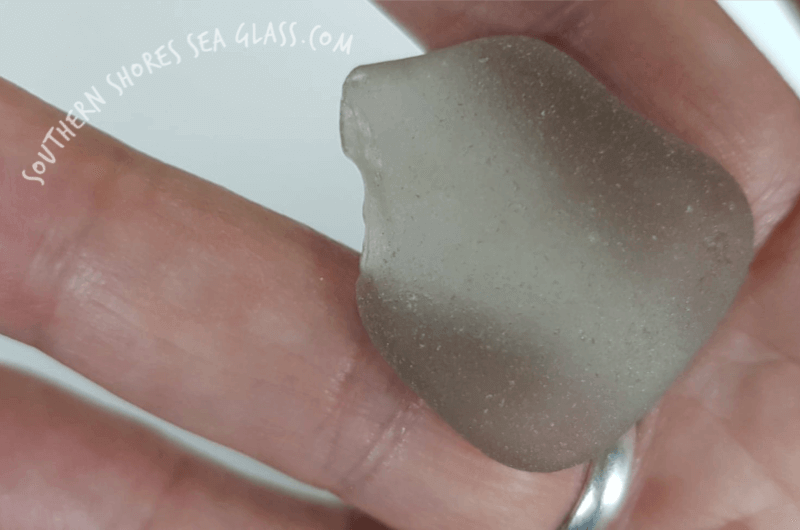 Origin of milk glass found these days on beaches would suggest originating around the mid 1900's. Usually from plateware, bowls, vases and ornaments. 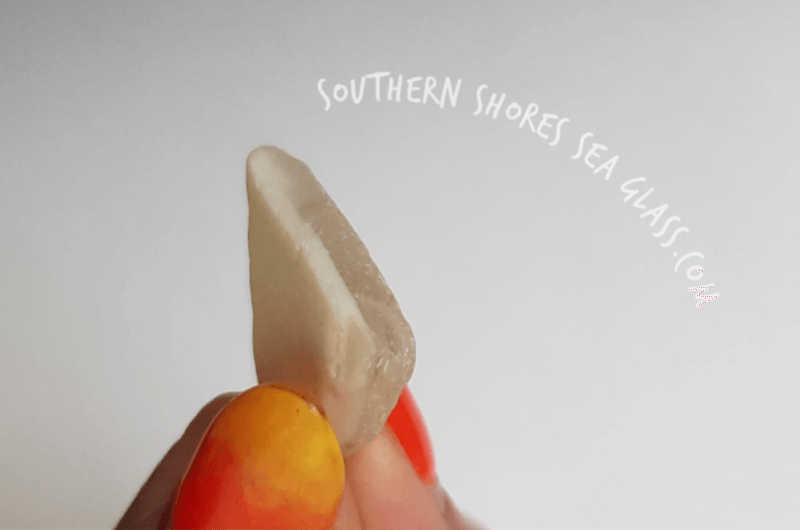 Mixture of milk glass and clear glass found on the Frankston foreshore in Victoria, Australia

Cadmium together with sulphur forms cadmium sulfide and results in deep yellow color, often used in glazes. However, cadmium is toxic. Together with selenium and sulphur it yields shades of bright red and orange.

Silver compounds such as silver nitrate and silver halides can produce a range of colors from orange-red to yellow.

- red sea glass color -  The Science: Selenium is one of the most important colouring agents for making pink and red glass. Being a non-metallic element, selenides, selenites and selenates of metallic elements are formed, but most of these are colourless and it is the free selenium atoms, which give the pink colour.

Selenide produces a range of deep red colours. As the amounts of selenium are increased and added to a cadmium sulphide glass, the pure yellow colour changes to orange and finally to a brilliant red known as 'Selenium Ruby'. It depends on the composition of the base glass and furnace atmosphere, whether ruby glass can develop its colour on melting or if the colour has to be stuck by reheating the cooled glass.

Origin possibilities are from from marine lights, ship lanterns, car lights, household and decorative items such as glassware, plates and bowls.

Anchor Hocking's Royal Ruby Red Glass, was extremely popular from mid to late 1900's, showing up again in the 1970's. Anchor Hoskin was also asked by Schlitz Beer to produce a bottle for them in the 1950's.

They had found a way of using copper to turn glass red and as this was a cheaper addition to that of gold, it became more practical and less costly to use.

Some vintage Avonware was produced using red containers for products such as perfume bottles, decorative household goods and dinnerware. 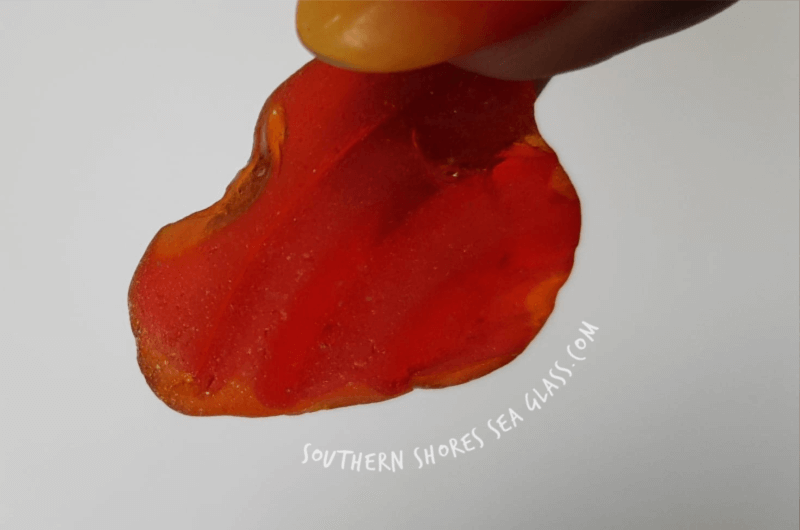 - turquoise sea glass color - a mixture of copper and cobalt is used to create this color. The exact levels of the additives made the production problematic. Production of these items originated around the late 1800's to mid 1900's.

Used in the production of Seltzer bottles, vases and art glass along with other decorative items. The glass was also used in window production as it filtered out strong light.

Black glass is one of the oldest bottle colors going back historically to at least the early 17th century in Europe. Black glass liquor and ale/beer bottles were mass produced as a cheap container between the 1840s and 1880s in a thousand shapes and sizes.

Most older black shards, as well as other rare and different colored sea glass, tend to be thick because glass, before the automation of glass production in the early 20th century, was thicker than contemporary glass. 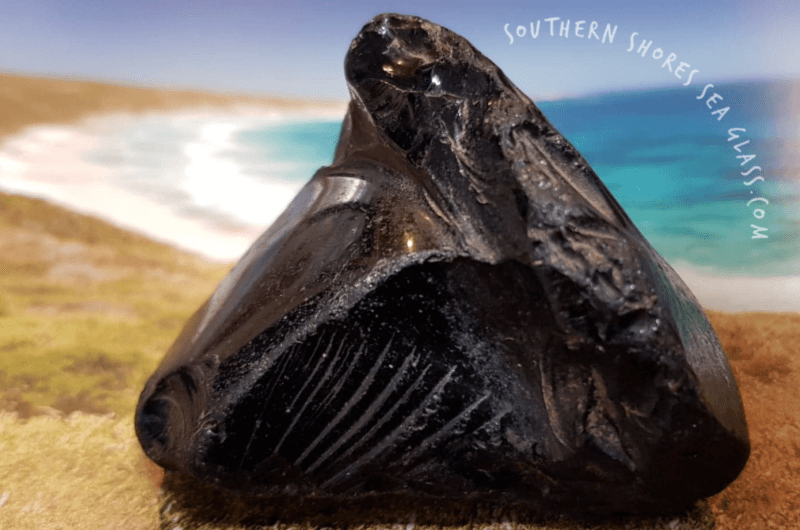 Because of the thickness and density of the glass, very little light passes through the glass making it appear black. Holding a piece up to the light might show the existence of another color such as green or blue or even aqua or red.

Early dated black glass bottles were produced in mass having square, triangular or rectangular shapes. This aided transportation over long distances in cargo holds and allowed for more product to be transported.

This is a wonderful chart to use when identifying your sea glass specimens. It comes in a variety of sizes and is laminated for extra protection. Made by Meg, The Carter Sea Glass Color & Rarity Guide is a great addition to your sea glass collection.

What is Genuine Sea Glass, is beach glass the same and how can you identify authentic sea glass from fake pieces of sea glass? 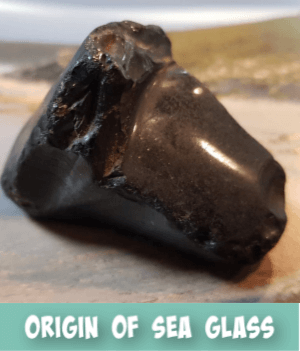 How is Sea Glass Made

How is Sea Glass Made, the colored and weathered pieces of glass that you find on the beaches around the world. Is your piece authentic? Where did it come from?


Some facts about me that you might find of interest? How I am turning my Hobby into a Website. Do you have a Hobby or Passion? 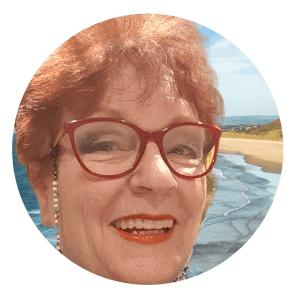 You might one day be thinking of building your own website business, then use my website building journey and Solo Build It Review as a basis for your decision